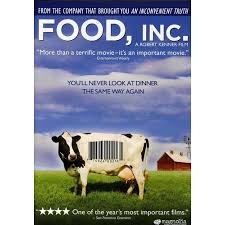 Perhaps the definitive cinematic investigation of the modern American food industry, the Oscar-nominated documentary Food, Inc. exposes a system rife with corruptive, secretive and abusive practices, and whose products contribute to the rising epidemic of obesity and all the deadly diseases that result.

The reality of agriculture in America is no longer the romantic farmer with the white picket fence and the sputtering tractor. Food production has become entirely corporatized, and it operates with limited regulations and absolute impunity. The demands of mass production have led to disastrously diminished quality standards, and have placed the health of all consumers in peril.

For the most part, the farmers themselves remain hesitant to speak out in fear of the overly litigious corporations that employ them. But in one of the film's most revealing segments, a chicken farmer does comes forward, and sheds light on some of the most egregious demands placed upon her by the industry. Her coops are overcrowded with forcibly fattened chickens who exist in extremely unsanitary conditions. Many of them are sick, and have developed immunity to their steady diet of antibiotics. The industry utilizes a cheap labor force, much of which consists of illegal immigrants, to load and transport the chickens.

From grain to poultry to vegetables, less than a handful of companies control the production of the foods we eat. Their too-big-to-fail monopoly comes at a disastrous price. The film delves into big agriculture's operational practices, reliance on dangerous pesticides and other chemicals, cost-cutting measures, unprecedented legal and political lobbying power, and insidious marketing tactics. Industry insiders and assorted food advocates testify to the changing nature of food consumption. We're also presented with the intimate stories of several ordinary citizens who have suffered under the industry's reign, including a grieving mother whose son died after eating a hamburger infected with E. coli.

The filmmakers don't let consumers off the hook, however. After all, the industry is only responding to the public's insatiable cravings for more food at cheaper costs. Many aren't aware of the consequences exposed in the film. That's just one reason why Food, Inc. is required viewing.